It all started with an event at Moscow’s Kenworthy Theatre. The showing was the award winning documentary film “Return of the River” which brings to light a successful dam removal project in Washington State on the Elwha River. About a minute into the film, Kay Kay Weso, co-worker at WSU Native American Programs, and I knew we were “in” and registered for the 2nd annual Free the Snake Flotilla!

On Saturday, Sept. 17, 2016 at 8am, we met up with likeminded people on the Snake River at Swallows Park in Clarkston, Washington, for the flotilla! WSU graduate and Nez Perce Tribal member, Rebecca Miles, shared emotional words and inflated the already pumped up crowd!

“I am very proud to fight along-side my brothers and sisters in this cause, including members of Save Our Salmon, Earth Justice, Idaho Rivers United, Friends of the Clearwater, and the other Tribes that have joined with us, including the Spokane and Kalispel. I am proud of the fact that the Plaintiffs have never wavered, they have never lost the focus during these Columbia River Accord years. Their focus and mine, has always been on these deadbeat dams. The battle has been going on long before me and I am hoping that the war is won in my lifetime. Winning the war means breaching the dams, starting with Lower Granite Dam. I am proud to utilize my power and influence any way I can to help restore what was promised to me as an individual citizen of the Nez Perce Tribe. I am even prouder of my people for not lying dormant and waiting for action. They have developed Nimiipuu Protecting the Environment and Nimiipuu Grassroots, both for protecting Mother Earth. We cannot survive without her in balance.” 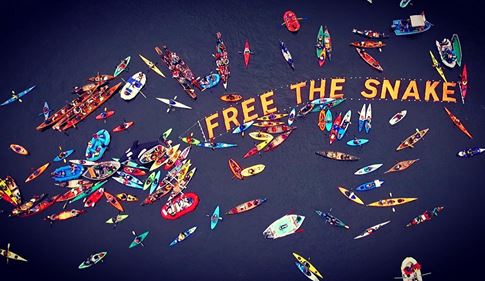 At 2pm, a handful of canoes, paddled by groups from around the Pacific Northwest, including the Spokane and Kalispel tribes, made a decision not to go back to Swallows Park. They turned instead, and paddled their heavy, wooden, dugout canoes and light, swift sturgeon nosed canoes 9 miles downriver to Chief Timothy Park, making a ceremonial landing on the island’s beach.At 10am, we joined the group launch, putting our kayaks into the water, and knew right away we were in with something “big”! The 300 or so boats paddled down the river to the confluence of the Snake and Clearwater Rivers, where we celebrated by circling the Free the Snake water banner!  There were announcements, chants, drones taking photos, and other amped up hoopla! The 6 mile paddle went off without a hitch except for occasional rain and one 30 foot dugout canoe which rolled all its occupants and gear out!

At 5 p.m. festivities unfolded at Chief Timothy Park, in Clarkston, Washington, where we enjoyed food, drink, guest speakers, live music, information booths, t-shirt sales, and networking with hundreds of amazing folks from all over the Northwest! We were gifted a key on a driftwood keychain marked #69, which opened the door to a cedar cabin on site, and we were set to spend the night! The entire park and campground were reserved for this amazing group! 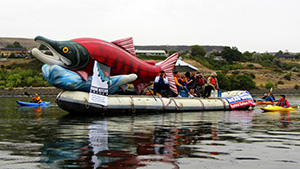 ​​​We all came together to combine voices in support of lower Snake River restoration. Wild salmon, steelhead, and pacific lamprey are dying due to the dams on the lower Snake River: Ice Harbor, Lower Monumental, Little Goose, and Lower Granite. These four dams are costing taxpayers millions of dollars to maintain and repair. Meanwhile, energy produced by these dams is being replaced by clean energy alternatives. The dams’ primary purpose, barge transportation, has declined nearly 70 percent. It’s time to begin the largest wild salmon recovery effort in the world, and revitalize economies, communities, and cultures throughout the Pacific Northwest and Northern Rockies. It’s time to free the Snake!At 11p.m. we were enjoying members of the Kalispel tribe, around their campfire. We learned of their 31 foot dugout canoe and their 60 mile journey up the Missouri River to the landing at Standing Rock, North Dakota. They offered stories, lessons, laughs, hand drum songs, friendships, and a late night paddle in their canoe. This was the highlight of my flotilla experience! We look forward to participating in their Flotilla, planned to be held on their newly acquired Frog Island, which was a Kalispel Tribe ancestral gathering place and is located on the Columbia River. 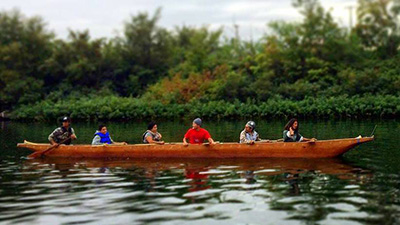 In May 2016, a federal judge in Portland wrote a scathing legal opinion calling for change to the broken status quo on the lower Snake River, and a historic opportunity is now dawning. The judge ordered dam managers to write a new environmental study that weighs a range of alternatives, including lower Snake River dam removal. That process, which must include public opinion, will unfold in the coming months, and citizens of the Pacific Northwest will be imperative to making it succeed.

“We are trying to raise public awareness as to the impacts of the lower Snake River dams and the high cost to society and low value provided by those dams,” said Kevin Lewis with Idaho Rivers United at Boise. “We believe that the dams will someday be removed as a measure to aid wild salmon and steelhead – which are listed as threatened and endangered under the Endangered Species Act. The group is convinced, looking at economics of the lower Snake dams that their time is limited, their days are numbered.”