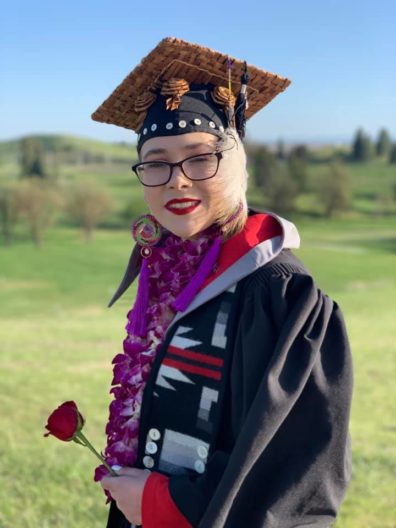 Why did you choose WSU? I chose to attend WSU because of the tribal scholarships that were offered and because of the Communication school here, Edward R. Murrow College of Communication. I also
wanted to be closer to home after attending Haskell Indian Nations University in Lawrence, KS.

What did you enjoy most about being a WSU student? I enjoyed being a WSU student through attending Native cultural events put on by Native American Programs and also the various clubs associated with NAP. It made me happy to rep my tribe on campus and share about it and learn about other cultures.

What activities/programs were you involved with while at WSU? I helped found the first and currently only Native American-based Greek letter organization in all of Washington state, Alpha Pi Omega, on our campus. It made me so proud to be a part of something bigger than myself such as bringing such a sisterhood to the students WSU has. I also was PR chair for ASWSU Ku-Ah-Mah. It was a big undertaking doing marketing for a powwow. I learned a lot from the experience, the mistakes I made and overcame.

Did any particular WSU program make an impact in your success as a student? The most impactful program for me on this campus was Native American Programs. Everytime I felt discouraged in class, upset with a racist, microaggression comment, I was able to have the space in the Center to feel validated and heard. Also the free printing and activities they have helped kept me going in my studies here.

What was your biggest challenge to achieving your education and how did you overcome it? My biggest challenge that I faced at WSU was having my indigenous identity challenged. As a white and Cowlitz identifying person, I felt I had to try and prove more and more of myself because people didn’t understand the complexity and intersectionality that comes with simply being an indigenous person. After talking with many professors and mentors, I learned how to communicate more eloquently how people needed to grow their understandings of indigenous people, that it was a thing they had to do, not necessarily something I had to do. And to also find ways to be more comfortable with myself.

What are your future plans? My future plans are to take some time off from school. I need to regather necessary energy needed to excel in grad school. I want to research journalism and its impacts on Indian Country.

What advice would you give a freshman? My advice for underclassmen is to learn how to advocate for yourself in times of feeling like no one else is going to help you, in ways you need to be a successful student. It is your hard work that you complete on your own that gets you to the commencement stage.