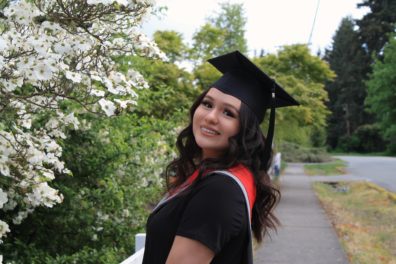 Why did you choose WSU? I chose WSU because my family has a deep-rooted connection to the school. Many of my family members, including both of my parents, attended Washington State. Ultimately, the fact that I was chosen as the feature twirler persuaded me to stay in Washington to pursue my Bachelor’s. I was in between University of Hawaii and Washington State. Both had feature twirler positions available. I could not be happier with my decision!

What did you enjoy most about being a WSU student? Being able to share my passion for twirling with fans at football games and basketball games! That, and finding who I am through my success/failures, and the people that surrounded me.

What activities/programs were you involved with while at WSU? I was involved with University Recreation and with the Marching Band. Being a fitness instructor was the best decision I had ever made. I was able to become a dance instructor and a TRX (total body resistance exercise) instructor through UREC. It taught me so much about instructing exercises and creating choreography. I was also the feature twirler for the Marching Band for four years.

Did any particular WSU program make an impact in your success as a student? Marching Band definitely made the biggest impact on my success. It was a commitment, which motivated me to get my work done by a certain time and to keep up on due dates. I also had a big support system, which allowed me to connect to different people throughout the band. My hard work was always worth it when I got to travel with the band to bowl games and internationally for a parade in Ireland!

What was your biggest challenge to achieving your education and how did you overcome it? Overcoming my own internal struggles was the biggest challenge that I faced. I was on my own for the first time and I didn’t know anybody. I’m an introvert, which funny enough, definitely doesn’t come across when I’m on the field performing or in my dance class when I’m instructing. But I struggled with reaching out to friends or professors when I needed help because I had this idea that I should be able to handle everything on my own. I overcame this by becoming more familiar with my professors, seeing them during office hours or contacting them through e-mail.

What are your future plans? I am planning on applying to WSU’s Master’s program for Kinesiology, and from there, getting my PhD from Oregon State for Physical Therapy. I will also continue instructing dance classes and coaching baton twirling.

What advice would you give a freshman?  My advice would be to stay active in the community and stay physically active! Join a fitness class (they are FREE the first and last weeks of the semester!!). Physical health is a major key for mental health. Join a sports/dance/improv/intramural team or club! Most importantly, involve yourself at the Native Center! You will meet so many others who are just like you. They also have so many useful resources like computers, printers, snacks, and mentors to help you. Don’t ever limit yourself, these groups and programs are here for you!